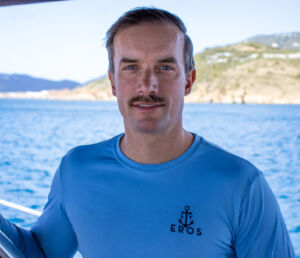 Justin cultivated his love for sailing on lake Austin, Ohio where he grew up. When he finished high school he joined the US Coast Guard where he served as a Boatswains Mate and coxswain on search and rescue and law enforcement missions. After the Coast Guard Justin attended a wooden boat building school in Washington state which led him to a career in tall ships. While sailing with Justin you can rest assured that you’re in good hands. Justin holds a 500 ton oceans USCG captains license. In his free time Justin enjoys spending time on his own boats and in the Mountains, skiing, treking and camping. Justin recently married our chef Aimee; they fell in love on board Eros. 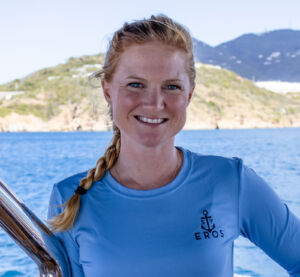 Aimee grew up on the local waters of New England. From an early age she developed a deep love for the ocean and sailing. Aimee joined Eros early on in her yachting career. She was looking for work as a deckhand, seemingly unaware that her great talents would take her much further in the yachting scene. After a delivery from Antigua to the Virgin Islands she received a call from the captain of Eros asking her to join for two charters. Aimee’s love for Eros grew quickly and she received the full-time position as Chief Stewardess. In that position Aimee quickly became the heart and soul of our charter guests’ experiences, especially around mealtimes and cocktail hours.

Aimee fell in love with Eros and found a passion in working with her crewmates in caring for this classic, especially sanding and varnishing an endless supply of teak. As her time progressed, Aimee started cooking more and more, mostly for the crew, eventually deciding to become our chef. She recently completed training at the Ashburton Chef’s Academy in Devon, England, and has already wowed several charter parties with her newfound skills. She is ecstatic to serve our guests delicious and nutritious meals for years to come. Aimee was recently married to Captain Justin who joined Eros after Aimee. They fell in love on board. 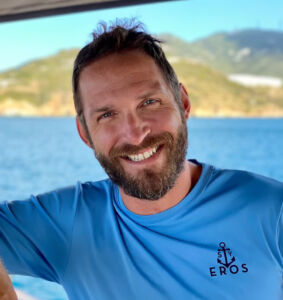 Jared started sailing dinghies and other small boats on Lake Dillon near his home in Breckenridge, Colorado. He joined a steel l ketch carrying charter guests between Panama and Colombia through the San Blas Islands and fell in love with sailing and the charter business. From there Jared traveled by land through many different countries, but really missed sailing so he found himself on more yachts, gravitating towards larger and older traditional vessels, mostly schooners. Jared loves wooden yachts, the older the better; he enjoys their character. And he loves sharing time on these yachts with guests that he can teach and form friendships with. He enjoys long sea deliveries, seeing the crew become a team, standing watch and partaking in the ultimate nature outing. In his free time Jared loves spending time in the outdoors and traveling as much as possible. 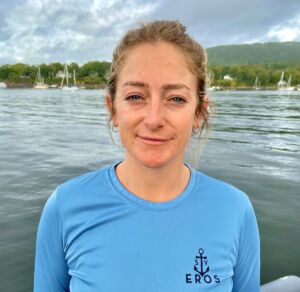 Bri grew up on Jamestown Island across the bridge from Newport, RI, where she naturally fell in love with the ocean, and boats. After a stint in the Hawaiian islands, she moved to the Virgin Islands to be close to her first love, warm ocean waters. Drawn to the yachts in the harbor she took a job on a charter boat and has not looked back.

Unlike most charter crew Bri threw in a couple of interesting side gigs, commercial salmon fishing in Alaska, and earning her Coast Guard captain’s license for up to six passengers. Look out, Captain Justin. She has rounded out her guest service experience with several years working in restaurants and hotels and truly loves to make sure Eros’s charter guests’ expectations are exceeded every minute they are on board. Bri also prides herself on her excellent mixology skills. 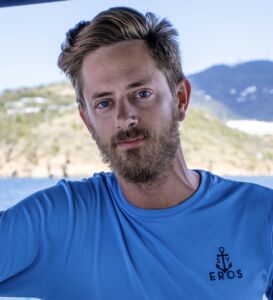 Max is a native of Pennsylvania and was introduced to boating as a child. While mostly on fishing boats, kayaks and canoes, he also sailed on lakes in the area. Later in life, he traveled extensively throughout Southeast Asia and fell in love with the ocean, scuba diving, and sailing whenever possible. Max was introduced to big boat sailing by a friend and crew member on Eros, where his first day on the job included going aloft to varnish the mainmast. On charter, Max is our steward working with chief stewardess Brieanne to ensure our guests’ needs are met. Max has a warm and cheerful personality and is well-liked by our guests and the rest of the crew.

Sailing a large classic like Eros is pure joy for veteran and novice sailors alike. Under a warm, tropical breeze, she heels gently and accelerates to ten knots or more, easily keeping pace with lighter and newer yachts. Guests can hoist sails, grind winches, take the wheel, or sit back and watch the crew at their positions; all once-in-a-lifetime experiences. Experienced sailors are welcome to charter Eros for one of the several classic yacht regattas she participates in during the year.

The safety of our guests is our highest priority. All crewmembers are trained in CPR, and Eros is stocked with adult and child-size life jackets as well as a complete medical first aid kit. On board satellite phone and Wi-Fi internet keep us in contact with the mainland, and our sailing routes mean we are never far from medical facilities if needed.